About 50 € the end of 2015 to obtain a tablet with Windows 10 Home. It was tempting, because it was curious to know the Windows OS on mobile devices. Equipment:

Amazing was the first start, leaves as liquid to work with the touch menu. The flash memory von16 GB for the operating system is too small in my opinion. Twice would have saved a lot of troubles in the subsequent upgrade. The results with the cameras are not great. The mono audio sound may not like. Thanks to the WLAN SurfTab connects easily to the existing router. Surfing on the couch fun - My TV dominates Miracast, and thus can be the action of the small but sharp and bright IPS display occasionally switch to big-screen. But the battery life - I have never matched the manufacturer's 6 hours: To the 2 hour you can work on average with the tablet. This is the great weakness.

The delivery of my SurfTab Wintron 7.0 took place in January 2016 and still with the WINDOWS 10.0 RTM version from the summer of 2015. But that autumn update has the advantage the apps from the C: / - partition can outsource on the SD card.

On a Windows PC the 'Microsoft Media Creation Tool' was downloaded and thus a WINDOWS10 32bit installation media on a USB stick created: The important Windows10 upgrade to version 1511 (Nov 2015). After many attempts to setup upgrade via the USB port (always lacked in the internal flash memory space), I copied the upgrade volume on the inserted SD card. From there I could start the setup.exe and by lack of storage space the way  D: / (SD card) could take as storage space. The November upgrade has now been carried out up to the end. Since it took a few hours, it was necessary to connect the power supply via the micro-USB connector. It was also during the system settings and update attempts often called for mouse and keyboard, because the buttons 'Next' or 'OK' not responded to finger pressure. 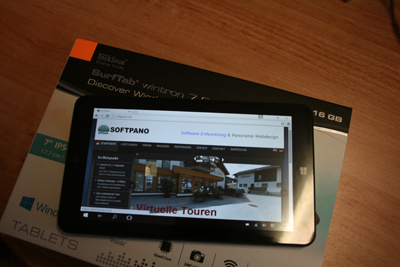 The TrekStor SurfTab Wintron 7.0 is a very inexpensive way to meet a full WINDOWS10 on a tablet. The freedom to choose any familiar from the PC program and sometimes to track / presenting on large screen of the TV is already great. The comfortable surfing on the couch working fine. The battery is the major flaw. But more than 2 - 3 hours you do not want actually also "hang" on the tablet. Then it must to the power supply. Cameras and mono audio can be forgotten - so you can not do much.